I make no secret that I’ve never been a very maternal person. That being said whenever I thought about having babies I always imagined breastfeeding them. I never particularly knew anyone closely who breastfed but I just thought it was natural and therefore it must be easy!

When I got pregnant I started researching everything and hearing stories from mothers on their breastfeeding experiences. I started to realise it wasn’t as easy as I’d thought and for many people it’s huge struggle. I knew I wanted to breastfeed so I just decided to try as hard as I could and I asked Josh to encourage me and try not to let me give up!

When everything went wrong with my birth plan and it all felt totally out of my control I was even more determined to get this one thing to go right. Thankfully Dorothy latched perfectly and got off to a fantastic start. Margot took a bit longer but eventually she got there too.

When we came home things got a lot harder. The girls were so small that they fed almost constantly. I felt trapped and glued to the sofa. I kept asking myself if I could really carry on ?! I thought that if I gave them formula things would be better and some of the load would come off me. It feels so intense when it all rests on your shoulders.

I decided to give myself the goal of 3 months. If I fed them for 3 months I would feel I’d made it and I could stop without feeling guilty. I cried so much in those first three months but I finally made it and decided to keep going a bit longer. Many people told me at 4 months it started to get easier and I just prayed that this was the case because I couldn’t cope! 3 months turned in to 4 and now 4 in to 5 and I’m still going strong. My goal is now 6 months -when they start weaning but currently I feel like maybe carrying on for a year. I don’t want to put too much pressure on myself so I’m just seeing how it goes.

There are days when it is so, so hard. It seems like all they want to do is feed and I get no respite. On those days I want to give up but I just take a deep breath and tell myself not to make any snap decisions because tomorrow could be a better day. It usually is.

Since the girls were around 3 weeks old we have been giving them a bottle of expressed milk before bed. This was so that Josh could have some bonding time with them and also so they would find a routine and associate having a bottle with going to bed. It worked really well and from 8 weeks old we have had a bedtime routine down. They go to bed at 7 which is amazing as we get a bit of time together. We also introduced a dream feed of formula for a while to help them sleep longer as we were exhausted. After a while they started to refuse this as they were fast asleep and wouldn’t be disturbed so we have dropped that now.

In terms of formula, I’m not against giving it to them every now and then but really I prefer to give them breast milk. I have a huge stock pile in the freezer if I ever want to go out and also sometimes we use it on the weekends so I have more time to get ready. If we go away somewhere I generally have to give them formula for their bedtime bottle as I won’t have had time to express enough and I can’t really take my spare milk with me. We use HIPP organic milk as it’s supposed to taste the most like breast milk and our girls are very fussy! If we’re away I still pump regularly and hopefully I will build up enough of a supply that after a day or two we can get back to feeding them breast milk. I think being flexible is very key when breast feeding twins!

Tandem feeding is something I get asked about a lot. I have tried it and did it quite a bit at the beginning but I have just decided it isn’t for me. With my girls they both feed for different amounts of time and tandem feeding makes it difficult to sit one up, burp and entertain them. Have you ever tried moving your arms without your boobs moving too?! As it is they feed generally one after the other so they are on a similar schedule if not exactly the same. It can be hard feeding one whilst the other is crying but it’s the plight of a twin mum from time to time. Single feeding also means I can focus all my attention on one baby and we have special bonding time.

Breast feeding in public is always a tricky subject. Once the baby is latched on its fine as nobody can see anything but can be particularly awkward if they’re being fussy! I employ the tactic of pretending I’m not bothered when inside I’m mortified! At the end of the day it’s natural and it’s just how Dotty and Margot get their food. I have used breastfeeding rooms etc. but often I prefer just to find a coffee shop and feed there so I can chat and enjoy a coffee at the same time! Feeding when I’m out on my own is much harder as I have nobody to entertain the other twin – cue screaming! So if I go out alone I try to avoid it. Thankfully I’ve never had anyone get funny with me about feeding the girls… at the end of the day I don’t particularly want anyone to see my nips! So I will always be as discrete as possible and people should respect that.

At 5 months the girls are FINALLY starting to go 2+ hours between feeds and where they were once feeding 12-15 times a day it’s now more like 5-7. Much more manageable. I imagined by this point we’d be on a strict routine but that hasn’t happened… I think with babies in the first year it’s better to just go with the flow (pardon the pun!)

So there we have it. Still breastfeeding almost exclusively and no plans to stop yet. If you’re struggling with feeding take heart. It does get easier and it’s the best start in life for your precious baby! 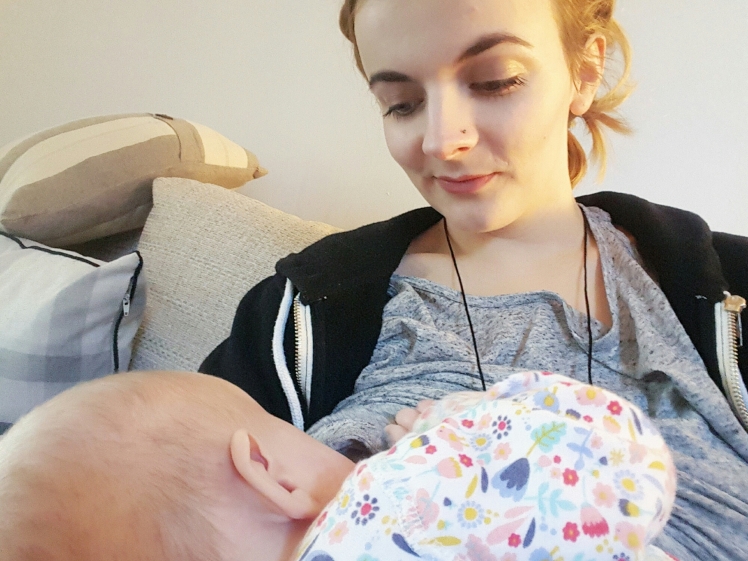 3 thoughts on “5 months of breastfeeding twins!”

What a babe
Before & after but not the one you usually see. I guess people are probably struggling with body changes at the moment and I totally relate. But each season of your life will reflect differently on your body & there is no right or wrong. The left photo is me in 2014, I was 20 years old. I was walking 3-4 miles per day to travel to uni & work. I worked in a big shop where I was on my feet all day long. I didn't have a particularly healthy diet and I ate loads of chocolate whilst watching tv every single night. I exercised semi regularly - basically 2-3 mile runs twice a week. Middle is me 24 weeks pregnant with twins in Italy feeling super uncomfortable in my body. The right photo is the most recent photo I have of me in a bikini though it is a year old now. Probably one of the biggest weights I've been for a while yet I'm physically at the fittest I've ever been. I regularly run 10k, managed to run a mile in 7mins 48 (this time last year I could do 9m48). Also lifting weights and getting stronger. My lifestyle is less active and my body has changed irreversibly from carrying twins. The medication I'm on that keeps me healthy also causes weight gain. In a year's time my body will probably look completely different and that's ok. If your body looks different at the end of this pandemic it's ok. We aren't supposed to stay the same all through life and you'll get back to "you" sooner than you think 💕
"Mummy I want to go to the beach" me too kid, me too 😭 missing the beaches and the sea so much these days. The weather has been so lovely lately and normally that would have meant spending most days at the beach but alas we can't. Can't wait til the day we can finally get back to it!
All dolled up, nowhere to go. Enjoying not wearing make up or making an effort but it felt nice to paint my face today ⭐
What a babe 😍 (ft the plaster on her head cos I pulled a huge scab off prematurely)
Keep seeing posts about people wanting to kill their partners. Times like these I'm glad I quite like the person I'm shacked up with